The 2018 Tony Awards are officially over! June 10 was a night of emotional speeches, political shoutouts, unforgettable performances and many a trip to the podium for The Band’s Visit. Broadway.com’s Ryan Casey illustrated some of the most memorable moments from the night! Go ahead—enjoy those viewing party leftovers, stay in those sweatpants for as long as possible and relive the 72nd annual Tony Awards!

"AND THE TONY GOES TO…THE BAND'S VISIT (AGAIN)!"
The Broadway musical The Band's Visit begins and ends with, "Once, not so long ago, a group of musicians came to Israel from Egypt. You probably didn’t hear about it. It wasn’t very important." Well, that certainly changed after Tony night, with the intimate show based on Eran Kolirin's 2007 film sweeping the awards and making first time Tony winners of its creative team and stars Tony Shalhoub, Katrina Link and Ari'el Stachel.

ANDREW GARFIELD HAS HIS CAKE, EATS IT & SHARES IT TOO
A favorite to win the Best Leading Actor in a Play Award for his powerful performance as Prior Walter in Tony Kushner's landmark play Angels in America, Andrew Garfield didn't disappoint when he took to the podium for his big Tony moment early in the ceremony, setting the woke but warm tone that took over the night: "I dedicate this award to the countless LGBTQ people who have fought and died to protect that spirit to protect that message for the right to live and love as we are created to," Garfield said. "We are all sacred and we all belong. So, let's just bake a cake for everyone who wants a cake to be baked!" 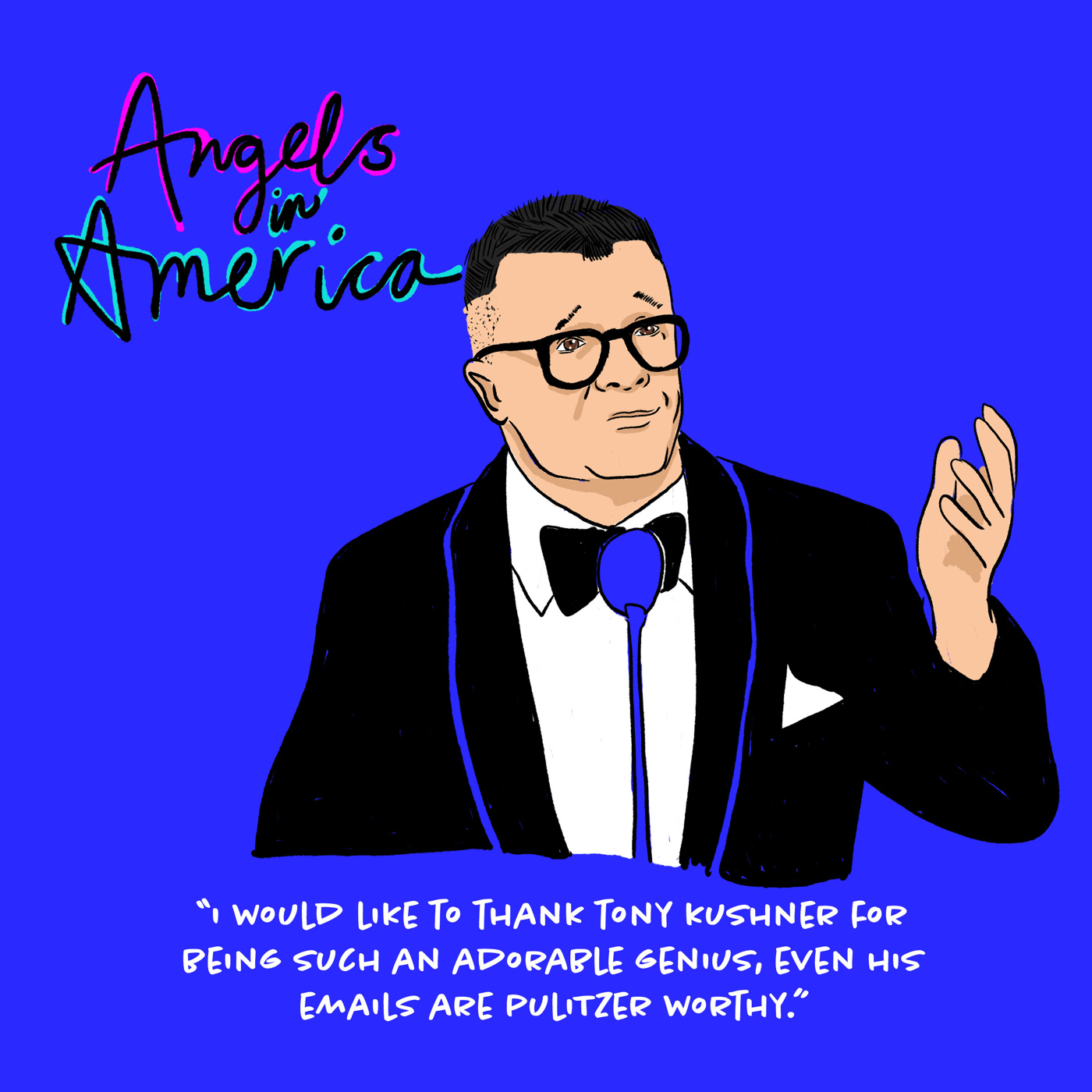 GOOD OLD RELIABLE NATHAN
Nathan Lane took home Tony #3 for his searing performance as Donald Trump's mentor and lawyer Roy Cohn in Angels in America, his first trophy for a play. "I needed to scare myself again and challenge myself more because I felt I had more to offer as an actor," he said in his emotional speech. "This award is a lovely vote of confidence that I've been on the right path." Lane's first two Tonys (for The Producers and A Funny Thing Happened on the Way to the Forum) established him as a comedy king. This accolade confirms what we've always known: Mr. Lane can do it all.

GLENDA JACKSON'S FIRST TONY WIN
Three Tall Women's towering talent Glenda Jackson has received a Tony nomination for every show she's appeared in on Broadway. June 10 marked the two-time Oscar winner's first Tony victory. Even sweeter? Hearing her echo the evening's theme of unity in her speech. "There are people in this audience, in this country, in this city from every other country in the world. And you, as always are welcoming and kind and generous, and America has never needed that more," Jackson said. "But then, America is always great." So too is Glenda Jackson. 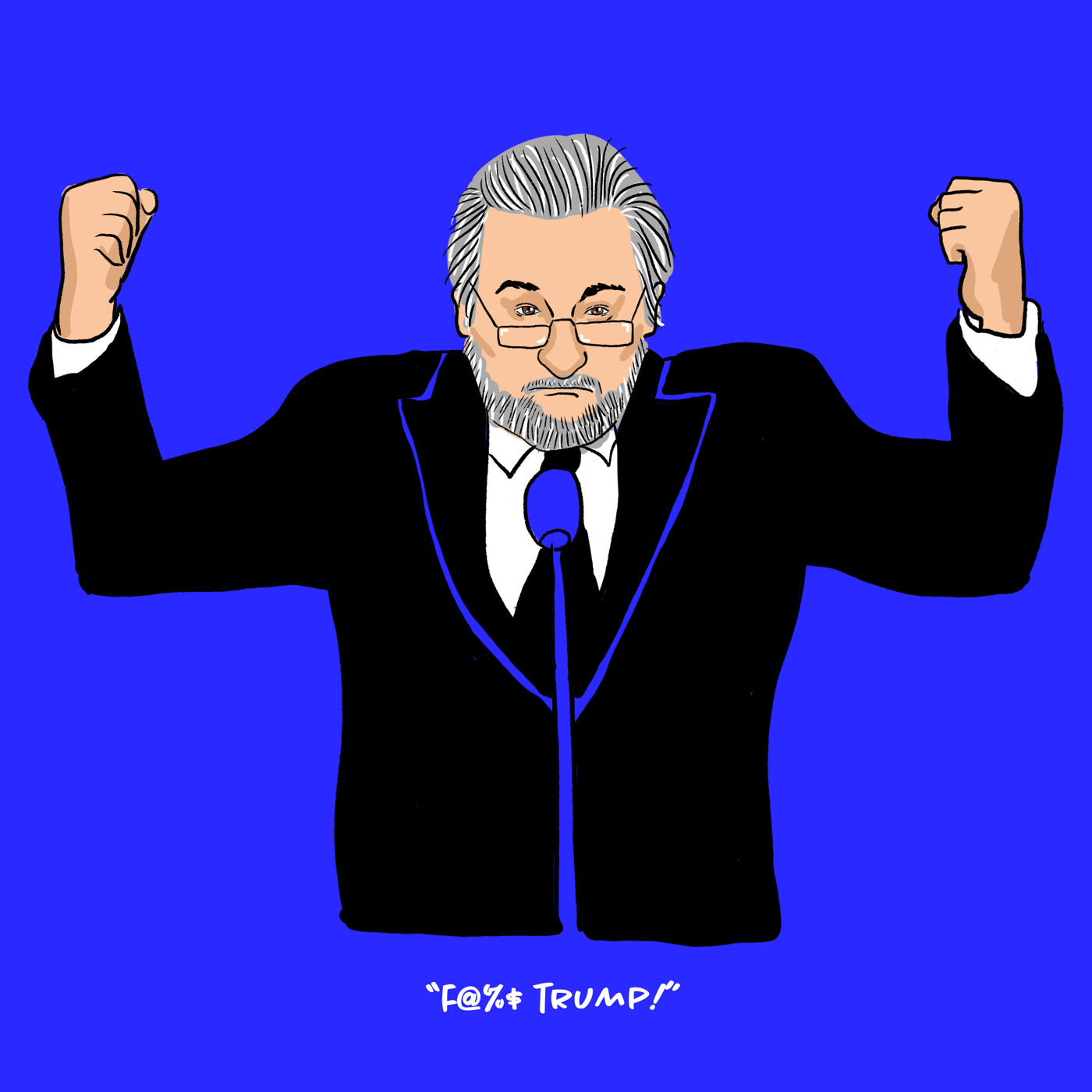 TONYS SO POLITICAL
From Tony Kushner to Glenda Jackson, those who took the podium on Broadway's biggest night certainly used their platform, whether it was to encourage Americans to head to the polls for the midterm elections or simply to remind the audience of the qualities that actually make the United States great. Robert De Niro made a particular political splash. Though those watching at home may not have heard, those at Radio City Music Hall and pretty much anyone who peeked around on Twitter got it loud and clear (twice): "F*ck Trump!"

ONCE ON THIS ISLAND'S SURPRISING WIN
We even said it in our 2018 Tony predictions roundtable: althought it has many fans, there simply was not a lot of awards buzz about Once On This Island for Best Musical Revival. The big win for the Michael Arden-directed gem playing at the Circle in the Square Theatre was definitely the biggest surprise of the evening—even and especially for the Once On This Island company. Producer Ken Davenport accepted the award, saying, "This is a business where you hear 'No' an awful lot, so this award is dedicated to all the people who said, 'Yes' to this production." The gods certainly heard their prayer! 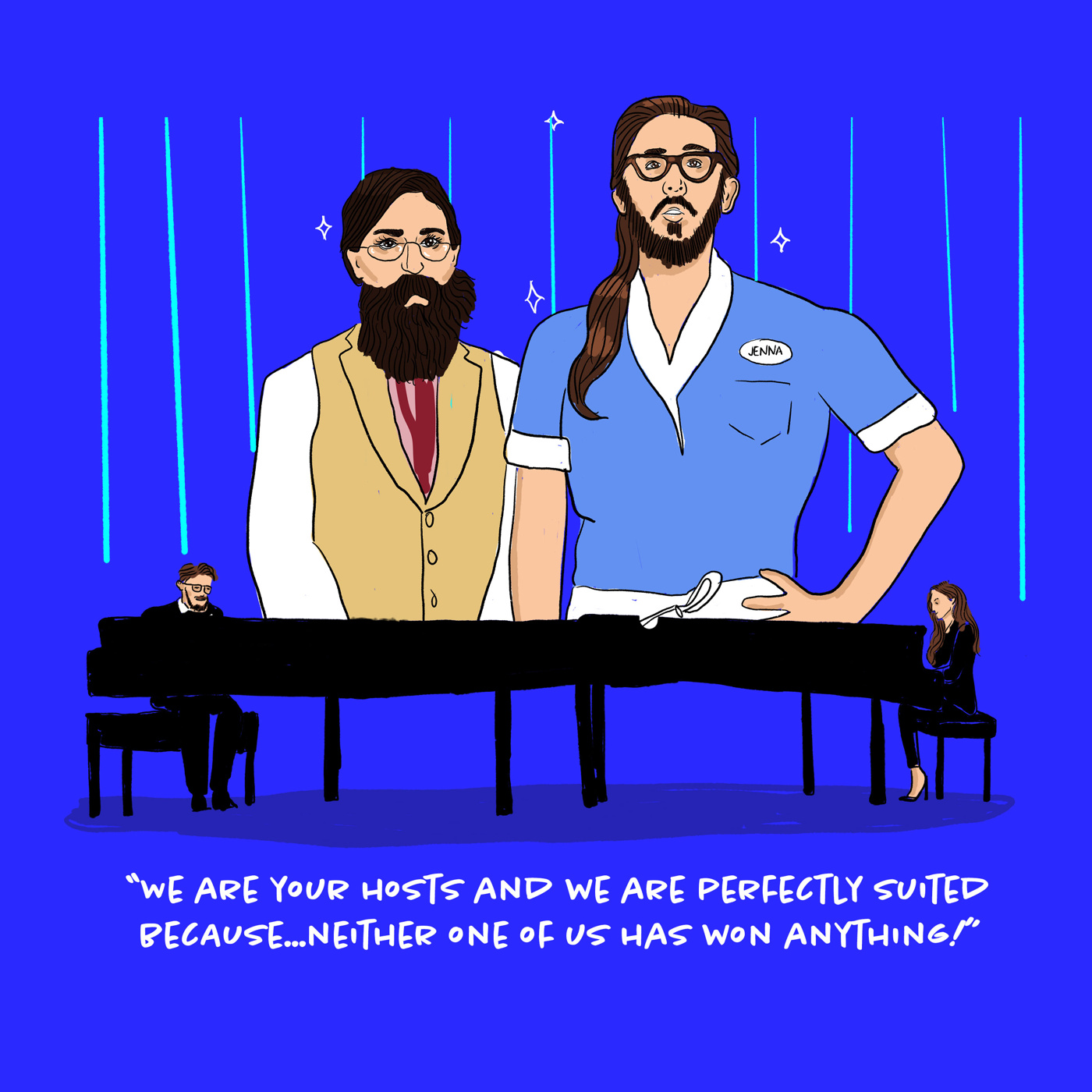 SARA BAREILLES AND JOSH GROBAN'S BROADWAY MAGIC
Costume changes, original musical numbers and even conjuring Harry Potter and the Cursed Child Tony nominee Jamie Parker from thin air, it's safe to say that the evening's host and Broadway-loving BFFs Sara Bareilles and Josh Groban made Broadway magic as emcees. They sang about losing and dreaming, rocked gold jumpsuits and even swapped costumes from their Broadway roles: Bareilles rocked a beard and specs as Pierre from Natasha, Pierre and the Great Comet of 1812, and now, we're just waiting for the announcement that Josh Groban will head to the diner as Jenna in Waitress. 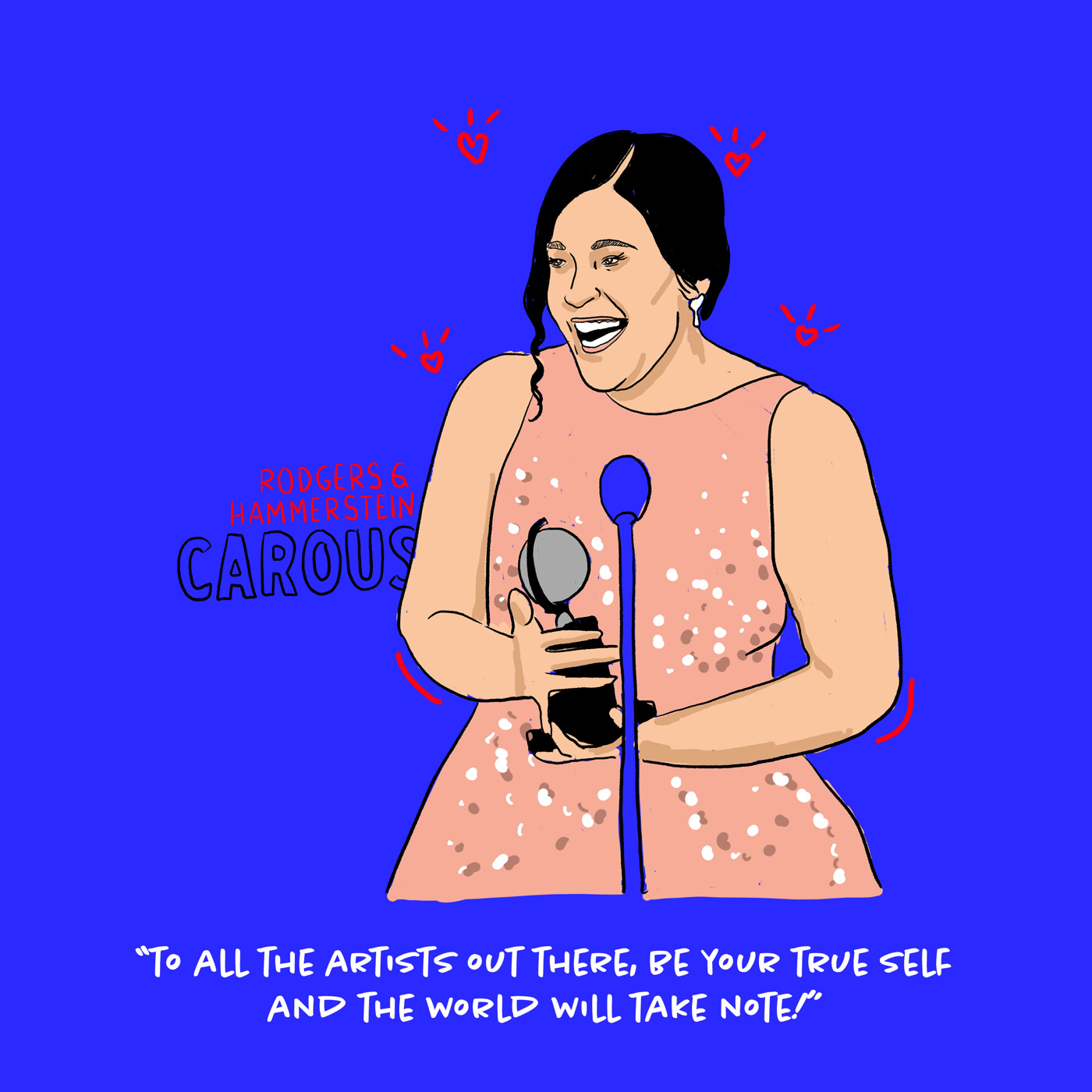 LINDSAY MENDEZ'S MESSAGE FOR ARTISTS
We've loved Broadway favorite Lindsay Mendez since she was our Fly Girl. How great was it to watch her become a fancy, smancy Tony winner for her gorgeous work in Carousel? Leave it to Wicked's former green girl to shout out individuality in her acceptance speech: "I just want to say, when I moved to New York, I was told to change my last name from Mendez to Matthews or I wouldn't work," she said. "I just want to say how proud I am to be a part of a community that celebrates diversity and individuality. To all of you artists out there, just be your true self and the world will take note."

BROADWAY'S BOSS
Springsteen on Broadway has been doing gangbusters at the box office and bringing in a whole new type of audience to the Great White Way. Bruce Springsteen received a Special 2018 Tony Award for his hit concert engagement, currently selling out at the Walter Kerr Theatre. The Boss took the stage at Radio City Music Hall to spin a yarn and play a rendition of "My Hometown." Springsteen's stripped down performance may not have had the typical Broadway razzle dazzle, but that is exactly why audiences are leaning in to listen to this American poet. After multiple extensions, we're glad to have the Boss on Broadway.

LAURIE METCALF'S COMEBACK
Last year, Laurie Metcalf garnered her first Tony for the return of Nora in Lucas Hnath's A Doll's House, Part 2. This year, the performer returned to the podium for her performance in Three Tall Women, beating out the Brits in her stacked category. We noticed Metcalf thanked director Joe Mantello in her acceptance speech and sat right behind fellow winner Nathan Lane. Hopefully that Death of a Salesman revival was a subject over cocktails at the after party! 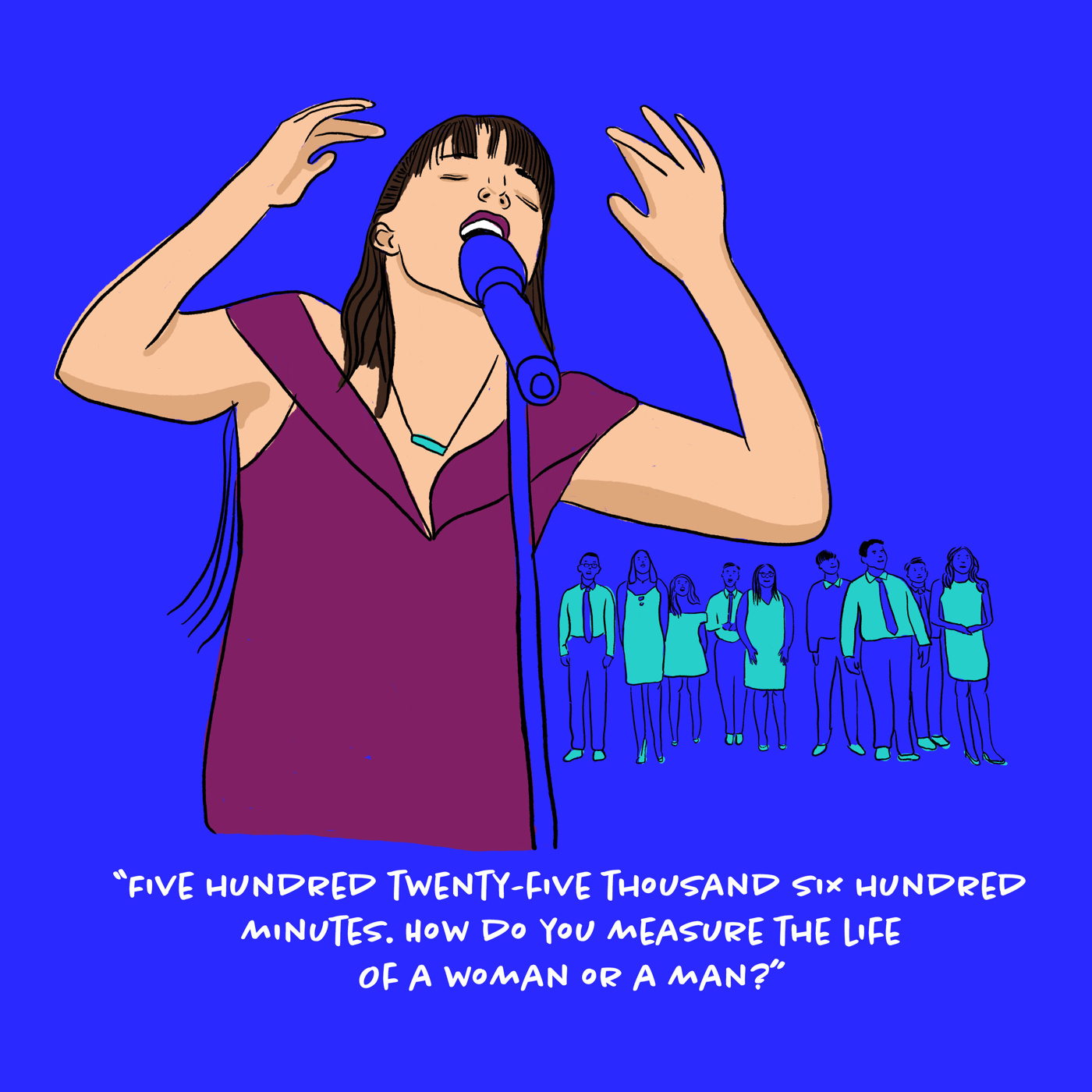 PARKLAND STUDENTS TAKE THE STAGE
Easily one of the most emotional moments of the evening was when the Parkland drama club took the stage to perform the Rent tear-jerker "Seasons of Love." Melody Herzfeld, the Stoneman Douglas High School theater teacher who saved the lives of 65 students during the recent tragic shooting in Parkland, FL, was presented with the Tonys' 2018 Excellence in Theatre Education Award. In celebration of Herzfeld’s win, her students, including soloist Kali Clougherty, took to the stage for a performance that left viewers, both at Radio City Music Hall and at home, emotional. This moment was atruly a reminder of theater's power to bring people together to heal.